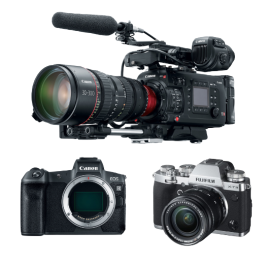 Canon C700 FF adds a full-frame sensor to the C700. The C700 is Canon’s first cinema camera to adopt a shoulder-mount form factor, and includes operator-friendly improvements like a side LCD menu and an EVF. It records XF-AVC, ProRes, and Canon Raw (over SDI, or the dockable Codex recorder for higher frame rates).

Canon 1DX Mk. II is the current flagship in Canon’s DSLR line. It inherits video features from the 1DC such as MJPEG recording, and offers improved slow motion capabilities and rolling shutter, but retains the crop factor when recording in 4K, and does not include C-log.

Fuji X-T2, X-T3 and X-H1 are Fuji’s first stills cameras with a serious focus on video. The X-T2 introduces 4K recording along with a number of film emulation profiles, however compression is limited to 8-bit 4:2:0. The X-T3 adds 10-bit recording options, reduced rolling shutter, and a headphone jack. The X-H1 lacks the 10-bit recording and headphone jack, but features in-body stabilization, which neither of the other two models offer.

Leica SL is Leica’s first full-frame mirrorless digital camera. It offers robust build quality and a high-resolution viewfinder, however it is limited in dynamic range and low-light performance.

Red DSMC2 Dragon-X is a new sensor option for the Red DSMC2 lineup, offering resolutions up to 5K with a Super35 field of view. It shares the same recording specs with the DSMC2 Gemini without the low-light performance improvements.

Sony HDC-4300 and 4800 are live production cameras with a focus on high-quality slow-motion recording. They offers frame rates up to 960p in HD or 480p in 4K, with no reduction in image quality. As live cameras, they offers no internal recording, instead outputting over SDI or optical. Recording to XAVC, ProRes or DNxHD requires an external baseband processing unit and AV storage unit.

DNxUncompressed is Avid’s new format for high-end finishing in Media Composer. It currently supports only importing & rendering, with export capability coming in a future version. Also note that some variants of the specification aren’t available in Media Composer yet, such as the YCbCr 4:4:4 flavors.

This version also includes updates to the Sony Venice, Panasonic EVA-1, Sony X-OCN, and Avid compatibility results. It also updates the definitions in the glossary.

// Zak and the team at Gray Hour